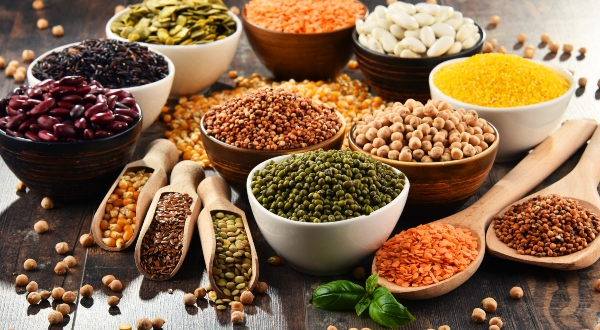 Global livestock, which means all farm animals except chickens, emit 7.1 gigatons of carbon dioxide–equivalent gases into the atmosphere every year. This counts for 14.5 percent of all man-made greenhouse gas emissions, driving global warming. Researchers recommend eating less beef, but is it that simple? The process of vetting climate-friendly, alternative proteins is more complicated than it might seem, which is why Landscape News compiled this list. When putting together your meal plans, here are some facts and foods to keep in mind.

A good place to start looking into the cornucopia of alternative proteins is the World Resources Institute’s Protein Scorecard, which ranks protein groups according to their climate-friendliness, meaning how much their production puts pressure on land and water, as well as how many greenhouse gases they release to the atmosphere.

The Knorr and World Wildlife Fund-United Kingdom’s list of 50 sustainable plant-based foods is a quite exhaustive compendium of what’s what in this food group, and it helpfully includes a detailed definition of what a sustainable diet is.

“It’s a diet that has low environmental impacts, contributes to nutrition, security and a healthy life for present and future generations,” says Ty Beal, a technical specialist in knowledge leadership at the Global Alliance for Improved Nutrition (GAIN) and part of the team that compiled the list. “It’s a diet that is protective and respectful of biodiversity and ecosystems, is culturally acceptable, accessible, economically fair and affordable.”

GAIN, along with the Food and Agriculture Organization of the U.N. (FAO), is among the organizations leading global initiatives to defeat hunger and achieve global nutrition. Their advice? Explore alternative proteins, but do your homework. Choose proteins that are sustainably produced and available close to home.

“Obviously, you wouldn’t want to eat food that has to be shipped from across the globe,” says Beal. To find sustainable options in your area, browse the offerings at your local farmers market and ask the sellers how they grow their food.

Beal took exception to the listings of wheat, corn and rice on the protein scorecard, suggesting we strike those off our lists. “Grains are generally poor in the nutrients that are commonly lacking, especially in developing countries,” he says.

Anna Lartey, director of the FAO Nutrition and Food Systems Division, agrees. She says wheat corn and rice don’t need to be on the list because “they are staple foods and are very high in carbohydrates, thus contributing mainly calories.”

Find out how your region consumes protein and tweak your meal plans accordingly. For example, wealthier nations like the U.S., Canada, the E.U. and China consume more protein than they need, most of it animal-based. So if you live in any of these countries, try more plant-based alternative proteins, and eat only what you need.

“Everything in moderation,” says Lartey. “Almost every crop we produce has some environmental footprint. I will not give a blanket recommendation that everyone should stop eating animal-sourced foods. I work with different countries around the world, and in some parts, the consumption of animal-sourced foods is way below recommended levels.”

“In fact it would be very difficult for me to say what the top 12 sustainable protein sources are,” Lartey adds. “Each location will have a different list.”

With those guidelines in mind, here is a starter list of 12 foods that are climate-friendly, high in protein, and accessible and sustainably produced in many places. It’s meant to spark ideas for new recipes and to encourage sourcing of similar, locally-available foods.

With the exception of hemp and flax seeds, the following protein information is for the cooked forms of these ingredients.

For comparisons, cooked beef can contain 30 grams of protein per 100-gram portion, cooked pork about 28 grams, and a cup of edamame (steamed soybeans) about 12 grams.

Nutritionists recommend a minimum of 56 grams of protein a day for men. For women, it’s a minimum of 46 grams. If you want a more precise estimate based on your activity level, age and other factors, try this protein calculator.

9 grams of protein per 100-gram serving

7 grams of protein per 100-gram serving

Cowpeas are native to the African continent but are now grown in Latin America, Southeast Asia and the southern U.S. The most common varieties are black-eyed peas, southern pea, yardlong bean, catjang and crowder peas. All bring a nutty taste to dishes and are packed with minerals and vitamins, in addition to protein. They are drought hardy and heat tolerant. Cowpeas are used in soups and stews and are ground into flour. Some favorite cowpea recipes include falafel, collard and black-eyed pea soup, and Middle Eastern bean salad.

7 grams of protein per 100-gram serving

Also called jugo beans, ditloo marapo, indlubu, tindhluwa and many other local names, the Bambara groundnut originated in West Africa but is now also widely available in Sub-Saharan Africa. It can tolerate high temperatures and grows well in poor soils where other crops struggle. Like other legumes, the Bambara groundnut is a nitrogen fixer. This means the plant works with soil bacteria to absorb nitrogen from the air and deposit it in its root nodules. These nodules return some of the nitrogen to the soil where it can be used by other plants. This makes the Bambara groundnut a great crop to interplant with other crops. The legumes can be boiled, roasted, fried or ground into flour. In East Africa, the beans are commonly roasted and pureed to be used as a soup base.

Black turtle beans taste subtly sweet and mushroom-like and are popular in Latin American cuisine and in the Cajun and Creole dishes of the southern U.S. They are native to Mexico and are now also grown in many parts of North America. They are used in stews, curries and as a substitute for ground beef in many dishes. Black turtle beans are often combined with grains like brown rice, seasoned with garlic, onions and spices and served as a side dish. The beans are ever-present in the Mexican-American burrito, Brazil’s national dish called feijoada, Cuba’s moros y cristianos, and Venezuelas’ pabellon criollo.

Adzuki beans are the small, brownish-red legumes of drought-tolerant plants. They are popular in Japan and other countries in Asia where they are enjoyed for their mild, sweet and slightly nutty taste. Adzuki beans are packed with protein, antioxidants and high levels of potassium, B vitamins and fiber. They are great in salads, stir-fries, soups, as filling in sweet treats, and mixed with rice as a tasty side-dish. For starters, make a simple adzuki bean dessert with just sugar, the beans, a pinch of salt and ice water.

18 grams of protein per 100-gram serving

These tiny golden seeds are originally from Africa but are now cultivated in Myanmar and India. They are eaten raw, roasted or ground into tahini paste. Sesame seeds are often found sprinkled on crackers and baked goods. The Middle Eastern dessert Halva is made of sesame seed paste. Sesame seed oil is used in Asian cuisine, flavoring stir-fries, and other savory dishes and dressings. You can make tahini at home using just sesame seeds and olive oil. It’s handy to have when you make your own hummus, spreads and dips.

18 grams of protein per 100-gram serving

Flax seeds, from the common flax or linseed, are found throughout the U.S., Europe, South America and Asia. The seeds are rich in alpha-linolenic acid, an omega-3 fatty acid said to improve blood cholesterol, and are commonly used in baked goods, salads, cereals, vegetarian burger mix and other plant-based dishes. Try adding milled flaxseed to fruit or veggie smoothies. Or bake some toothsome Indian burfi bars.

32 grams of protein per 100-gram serving

Protein-packed hemp seeds are harvested from pest-resistant plants that thrive in many types of soil. These seeds have been part of Chinese and Indian cuisine for many centuries. Today, they are widely available in China, Canada, the U.S., France and Chile. They are the same species as cannabis (marijuana), but hemp seeds don’t contain tetrahydrocannabinol (THC), the compound that causes marijuana’s drug-like effects. The hulled seeds have a soft, buttery texture and are rich in good fats, protein, fiber, vitamins and minerals. Hemp seeds are available in various forms: as oil, a milk substitute, flour and in many products, like dips, sauces, soups, crackers, biscuits, breads and salads. Want a boost of protein? Sprinkle a spoonful in a bowl of steel-cut oatmeal and your favorite fruit.

23 grams of protein per 100-gram serving

This small fish is rich in antioxidants, omega-3 fatty acids and other nutrients. Widely available fresh, smoked and canned, this affordable fish features in many humble dishes worldwide. Germans enjoy pickled herring several times a month. Herring and onions are a favorite Jewish snack. The Scotts like it oat-crusted and pan fried. Filipinos like it smoked and served on a mound of steamed white rice and a side of fresh tomatoes.

25 grams of protein per 100-gram serving

In terms of animal-sourced protein, small fish is the most affordable option. Aside from being protein-rich, it is high in calcium – assuming you eat the whole fish – flesh, bones and all. “This is one of the best sources of protein in a lot of low-income areas where they are available, and as long as they are not overfished,” Beal says. Sardines are available in many countries, fresh, dried and canned. Dried baby sardines (46 grams of protein per 100 grams) are popular appetizers in many Asian countries. These are called niboshi or iroko in Japan and are used to make candied treats called tazukuri.

29 grams of protein per 100-gram serving

If you like anchovies on pizza, you’re probably getting enough protein for that meal. Pop culture has been unkind to anchovies, but these small fish pack as much protein as pork or beef. Put them in your pasta sauce or your Caesar dressing. Make a batch of anchovy mayonnaise to serve with tempura. Canned anchovies, whole or as filets, are available in most grocery stores. Salted anchovies can be found in fresh fish markets in Asia, or in many Italian markets.

Previously published on news.globallandscapesforum.org under a Creative Commons License.

If you believe in the work we are doing here at The Good Men Project and want a deeper connection with our community, please join us as a Premium Member, today.

All Premium Members get to view The Good Men Project with NO ADS. Need more info? A complete list of benefits is here.