The US reports Markit services PMI, the ISM manufacturing index, and a few other items of interest, but we see only one important thing in the US—does Trump leave the hospital and return to the White House, and can we believe a single word anyone says about his health condition?

It may seem as though uncertainty is lower than on Friday morning, but this is an illusion—nobody catches Covid 19 and recovers fully in less than a week. Besides, Trump was given steroids, which are given only to severe cases, on top of viral treatments. Any number of doctors on TV and the press are saying (and have been saying all along) that Trump’s illness is a whole lot worse than he is pretending. In other words, Trump lies. If and when this is disclosed in the form of a relapse and second hospital visit, what happens in the stock market? Maybe nothing much. According to NYU economist Roubini, the market accepts a Biden administration will not to bad for the economy or the stock market at all. See below.

The other item of real interest is the Reserve Bank of Australia meeting overnight tonight and likely to produce a Plan that will be coordinated with the budget to come the following day. The plan will likely include no change in monetary policy, but with tax cuts, new subsidies for business and infrastructure spending, as well as wage subsidies. Not to get overly enthusiastic, but compare with the eurozone, where tightwads keep the tension up, and the US, where Congress cannot pass a second stimulus bill. Japan has yet to deliver a new stimulus bill but the rumbling persists that the new PM has one in his pocket. For it to be Australia and Japan to be the two countries with a Covid-19 recovery plan is unusual, to say the least. Their currencies may benefit.

What is a risk to the stock market might be the now-rearview mirror payrolls report. Not going unnoticed is that those who have lost their jobs permanently number 3.8 million, up by 345,000 over August. Those out of work for over 27 weeks surged by 781,000 to 2.4 million. As the NYT focuses, a disproportionate number of those unemployed are women, but only the liberal press like the NYT makes much of it. Instead the idea is slowing dawning that the recovery “has shifted into lower gear heading into the fourth quarter,” as Reuters puts it. “Growth got a boost over the summer from fiscal stimulus. Third-quarter gross domestic product growth estimates are topping a 32% annualized rate, which would reverse a historic 31.4% pace of contraction in the April-June quarter. Growth estimates for the fourth quarter have been cut to around a 2.5% rate from above a 10% pace.”

The Atlanta Fed doesn’t see it that way and instead last week its GDPNow model estimate for real GDP growth was 34.6% (Oct 1), up from 32.0 percent on September 25. Notice that the Blue Chip consensus is less than half that at about 15%. We get another Atlanta Fed estimate tomorrow. Notice that the NY Fed NowCast is more in keeping with the Blue Chip consensus at 14% (second chart). The NY Fed projects 14.0% for Q3 and 4.8% for Q4. 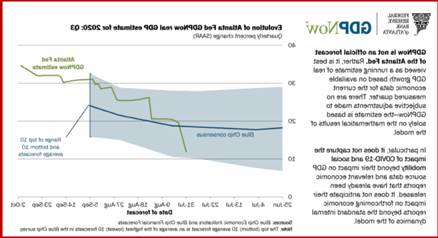 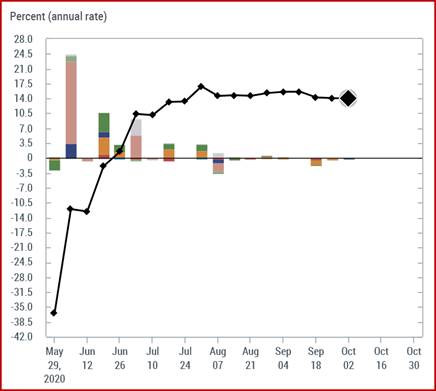 We guessed right last Friday that Trump catching the Covid-19 disease would not be seen as a major risk-on event or shock, but let’s be realistic—it was guess and it’s not over yet, anyway. Assuming he leaves the hospital against doctors’ orders and in defiance of every statistical probability he is not back in full fine fettle, a return to the hospital could be a Shock. After all, defiance of norms, institutions and science itself is the Trump playbook. If he is indeed sicker than anyone is admitting, a renewed round of uncertainty can morph into a new round of instability. We know Trump is unstable in the first place, but that’s his personality. What if he becomes unstable due to disease or as a result of the medications he is taking? This is something the stock market will not like, and in the context of a clearly slowing recovery, sellers may be inspired to get the hell out while the getting is good. We have to watch yields and the dollar index as a clue to whether a new round of risk-off is developing.

Politics: “Reap what you sow” is apt in the case of Trump, Christie and many Republicans now testing positive for Covid. Trump and his insiders are likely a “superspreader.” In February, Trump had said the Dems politicizing the pandemic was “their new hoax,” but while not calling Covid itself a hoax, that seems to be the start of downplaying it (it’s like the flu, it will be gone when the warm weather arrives in April, etc.). Mocking those who take the advice of scientists by distancing and wearing masks became a political identity instead of public health common sense.

A Reuters/IPSOS poll over the weekend found that 65% agree Trump could have avoided infection if he had taken the virus more seriously. In other words, he got what he deserved. He brought it on himself. It’s not anyone else’s fault—it’s his own fault. The only reason the number is not higher than 65% is that only half of the Republicans polled agree it’s Trump’s own fault. Nine of ten Dems say it’s his own fault. *

Upsetting the cable news universe all weekend were discrepancies in the reports from the hospital docs and from the names and unnamed White House staffers. He’s terribly ill and has oxygen, he’s not bad and didn’t have oxygen, he’ll be back on Monday. The lack of transparency can be named something else—secrecy—especially about the timeline, aka lying and trying to misdirect and confuse.

We’re pretty sure Trump was sick enough to be given oxygen and Regeneron on Thursday and he got steroids and Remdesivir at the hospital on Friday. Trump almost certainly was infected 5-7 days before symptoms, so yes, he had it at the debate with Biden last Tuesday. He probably got it at the announcement of the Supreme Court nominee the previous Saturday, if not earlier. In order for the Regeneron to be ordered for Thursday, he almost surely had the infection on Wednesday. That’s when the first treatment was ordered then, from the company that makes it in Tarrytown. Maybe they delivered it to New Jersey where 100 contributors amassed with no distancing or masks to shake his hand on Thursday. Endangering big party donors is a political crime they will not forgive.

Again the timeline calls for 3-7 days for symptoms to become acute if they are going to go that way. This is the danger zone when the immune system “cytokine” storm may appear. Probability of death is generally about 10-12% given age and obesity but much higher at 30-40% if the patient gets the storm. Bottom line—no one can say Trump is “recovering” until late this week at the earliest, and the end of the following week—if he avoids the cytokine storm.

We await Trump’s blame game. Who gave it to him? This is supposed to distract attention from the question of to whom did he give it? The best outcome will be if the Republicans decide this guy has so contaminated the party’s reputation by now that they can start recapturing the party for its traditional philosophy, practices and policies. They may boot him out. Reckless risking of New Jersey contributors is a last straw when pussy-grabbing is not. Classical Republicans can say it’s because his health is so compromised by Covid that he can’t be trusted with a second term. They won’t vote for Biden, just stay home or do some silly write-in (like Bolton).

Trump’s repulsive performance at the debate and his mismanagement of the messaging about his true health condition are big new factors that may change minds to the point of view that “Golly, maybe a return to normal would be nice, alter all.” Nobody is all that thrilled by Biden but many would vote for the dogcatcher to get rid of Trump.

Fun Tidbit: Biden has had a lead over Trump in polling since the spring and the US stock market has been on the rise since August, which means, according to Nouriel Roubini, that the market has no fear of a Biden administration. After all, it’s the Dems who raise taxes to pay for overspending, much of it by Republicans.

“Democratic administrations tend to preside over faster growth, lower unemployment, and stronger stock markets than Republican presidents do…. In fact, US recessions almost always occur under Republican administrations… The recessions of 1970, 1980-82, 1990, 2001, 2008-09, and, now, 2020 all occurred when a Republican was in the White House (with the exception of the double-dip recession of 1980-82, which started under Jimmy Carter but continued under Ronald Reagan). Likewise, the Great Recession of 2008-09 was triggered by the 2007-08 financial crisis, which also occurred on the GOP’s watch.

“This tendency is not random: loose regulatory policies lead to financial crises and recessions. And, compounding matters, Republicans consistently pursue reckless fiscal policies, spending as much as Democrats do, but refusing to raise taxes to make up for the resulting budget shortfalls.

“…Just as Trump inherited millions from his father, only to squander it on business failures, so he inherited a strong economy from his predecessor, only to wreck it within a single term.” Single-factor explanations are never right. Markets move on fundamentals that drive sentiment, sentiment that comes from the blue, charting that is good and charting that is crackpot, knowable statistics and out-of-left field randomness.

We think Roubini may be right—the market is not afraid of Biden. That doesn’t mean there is any relationship between current market moves and the election outlook.

This is an excerpt from “The Rockefeller Morning Briefing,” which is far larger (about 10 pages). The Briefing has been published every day for over 25 years and represents experienced analysis and insight. The report offers deep background and is not intended to guide FX trading. Rockefeller produces other reports (in spot and futures) for trading purposes.

To get a two-week trial of the full reports plus traders advice for only $3.95. Click here!