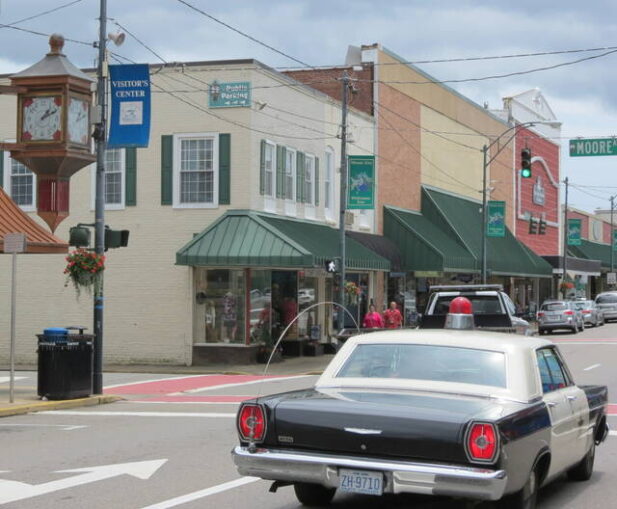 The eight candidates seeking four seats in Mount Airy’s municipal election are divided in their opinions on a downtown master plan update — basically reflecting the split accompanying its 3-2 approval last month by the city commissioners.

While four of the candidates polled are on record as opposing the plan, two have openly embraced it while a pair of others seem to be taking a middle-ground approach.

The timing of the plan’s passage in September has made it a political issue as the campaign winds to its conclusion with the Nov. 8 general election. It includes two candidates each vying for three city commissioner seats and that of mayor.

Along with the office seekers, the new downtown master plan — an update of one from 2004 — has drawn its share of supporters and detractors among the community at large. The 78-page document was prepared by Benchmark, a firm that has handled city planning functions since 2011, contracted as a separate project apart from its normal responsibilities.

The main bone of contention surrounds recommendations to provide “flex spaces” for outdoor dining and other uses by reconfiguring North Main Street, which runs through the downtown, and sidewalks. The plan also calls for tree plantings, burying utility lines and further cosmetic changes.

Critics fear all this could destroy the traditional charm and appeal of the central business district and give it the “cookie-cutter” look of some bigger cities.

Deborah Cochran, a former commissioner and mayor now vying for the at-large seat on the council, is one of those wary of possible repercussions.

“I grew up here and do not support making changes to Main Street,” Cochran commented.

“Our downtown has a positive effect on locals and tourists whether it be walking, shopping, eating at restaurants, getting a haircut, going to a movie show or the museum, watching parades or simply looking at the design of downtown.”

Cochran says what’s happening now reminds her of an “Andy Griffith Show” episode titled “Mayberry Goes Hollywood,” which involves citizens wanting to alter the town’s look in order to put on airs for a production. Yet its existing character was what the Hollywood crew desired.

However, Cochran’s opponent for the at-large seat, present South Ward Commissioner Steve Yokeley, believes there’s nothing to fear from the plan that was devised through the conducting of community workshops in a nine-month process.

“This plan is not a set of blueprints with a schedule to tear up the street tomorrow, next week or even in the next couple of years,” Yokeley responded regarding that concern. He says this is based on his research and participation in the update effort from the start.

“Some people will have you believe these things to incite fear in hopes of personal political gain.”

Yokeley made specific reference to a comment during the Sept. 1 commissioners’ meeting when a public hearing was held on the plan before the 3-2 vote.

“I heard it said by someone (then) that they wouldn’t be surprised if tearing up Main Street started the next day,” he recalled.

“That was a very misinformed statement,” Yokeley added. “The plan is simply a guiding document — there are many checks and balances always in place before any changes can happen.”

Future boards of commissioners will have the authority to make adjustments to the streetscape design once the planning process for each section of the document is implemented, according to Yokeley, “including when engineered construction documents are proposed.”

“When determining what parts of the plan are implemented, it is crucial to gain input from all the stakeholders,” North Ward commissioner candidate Chad Hutchens also stated along those lines.

“It is also vital that downtown businesses are communicated with transparently so all parties understand timelines and expectations and have information available to make decisions regarding their businesses.”

If he is victorious, South Ward commissioner candidate Phil Thacker pledges that no changes will occur willy-nilly.

“I love this town and I want to make all decisions after careful consideration,” Thacker remarked. “I will keep an open mind and listen to all of our citizens before making any decisions concerning the Mount Airy downtown plan” if elected.

“Some parts of the plan would need to be viewed again as to what works and what might not — it is not an all-or-none situation,” Niland stressed.

“We have been making improvements constantly over the years and they have proved beneficial,” he continued. “Funding and implementation (of plan elements) will come at some future date — when that happens we will revisit what is possible and find ways to minimize the impact on businesses.”

The mayor added, “I have stated that I support the process and goal of a better experience for visitors and residents alike.”

John Pritchard, who is running for a North Ward seat on the city board which Commissioner Jon Cawley is vacating to run for mayor, shares the view of many downtown stakeholders — basically, why mess with success?

“We already have a far better Main Street image and ‘brand’ than most any similar town in the whole country,” Pritchard observed. “It’s our own golden goose — unique, original and internationally known.”

Pritchard mentioned that this viewpoint is backed up by ever-increasing tourism figures for the downtown area.

“Let’s keep it in top shape, but certainly not exchange it for the same cookie-cutter ideas being pushed on many other towns,” the North Ward candidate noted. “That would be like the disaster of ‘New Coke’ many years ago, and they still haven’t fully recovered from that.”

In not supporting the plan, Pritchard asserted that the vast majority of the community has demonstrated the same opinion, including at the public hearing in September.

Meanwhile, his opponent, Hutchens, has a hopeful-yet-cautious view of the plan.

“I attended the workshops, read the plan and I am interested in growing our downtown while maintaining our small-town charm,” is his view, which also acknowledges the fallout from its passage.

“There are valid concerns with the plan,” Hutchens agreed.

“Businesses want to ensure their customers are not negatively impacted, and taxpayers want to know how the plan will be funded. I agree with those concerns and believe they can be remedied with exemplary leadership.”

“The Downtown Master Plan would be more accurately defined as Suggested Projects for Downtown,” in the words of Commissioner/mayoral candidate Cawley.

“The suggestions came after a group of invested citizens met over a period of nine months under Benchmark’s guidance,” he mentioned.

“I believe the desired goal for those meetings was to make our downtown better. Many of the suggestions could eventually accomplish that goal.”

Cawley voted against the plan on Sept. 1 along with Commissioner Tom Koch.

Aside from merits or shortcomings of the measure itself, Gene Clark — who is running against Thacker for the South Ward commissioner seat — has issues with how it evolved and the potential costs of recommendations included.

“I do not agree with the plan for several reasons,” Clark commented. “I think it is a conflict of interest to ask a company we currently contract with (Benchmark) to give us an unbiased assessment of our city planning, knowing they have a vested interest in the plan.”

A secondary concern to Clark involves its financial implications.

“I think the plan does not take into account the upfront cost as well as any ongoing costs. How do you approve a plan without knowing what the cost is?” he asked.

“Third, what is the return on our investment? I know we will never get 100% back. but there needs to be some justification for spending millions of dollars — how does it increase revenues for the city?”

Cawley also referred to the expense aspect: “A plan usually includes a timeline, associated costs and anticipated funding for completion.”

Clark additionally criticized the fact that the vote on the measure occurred during the same meeting as the public hearing when many citizens spoke against its passage.

“It appears the public hearing is a farce and that the decision (was) already made.”

Clark was one of those speaking during that session, saying he believed more information was needed before formalizing the plan.

But Thacker, his opponent, is comfortable with how it originated, citing the opportunity early on for citizens to have input at a series of workshops.

“There seemed to be a good turnout and plenty of discussion concerning the plan,” recalled Thacker, one of those there. “While attending these meetings there was a small amount of negative discussion for the plan, so I have been under the assumption that we all or most wanted to improve downtown with this plan.”

Now that a group of citizens is unhappy with the decision by the majority of the commissioners, Thacker says he needs additional information to better understand where everyone is coming from on the issue.

“We have a group that wants to keep Mount Airy the same and a group that attended those meetings that were working towards making a change.”

Cawley thinks the ongoing conflict could have been avoided.

“Our present problem is not so much the proposed ideas, but instead the response to those ideas,” he suggested.

“Those for and against the ideas have felt the need to ‘dig in’ to protect their interests. Our community has been divided and the quarreling has been sad to watch.”

Cawley lays this at the feet of his opponent, Mayor Niland.

“If I had been the mayor, I would have publicly corrected the misinformation that was being spread and avoided the unnecessary vote by the commissioners after the public hearing,” he explained.

“The mayor should have also given assurances to those afraid of losing their livelihoods, due to construction-caused business interruption, that such would not be the case, Cawley says.

“Our mayor’s silence has only exasperated the issue.”