2020 has forced us to rethink our approach to so many of the routines we took for granted. Even so, when a woman has a baby in the U.S., she may only receive six weeks of maternity leave. Meanwhile, paternity leave remains largely neglected. Now a new study shows that fathers may need parental leave as much as mothers do. Maybe it’s time to rethink how we support families with new babies. 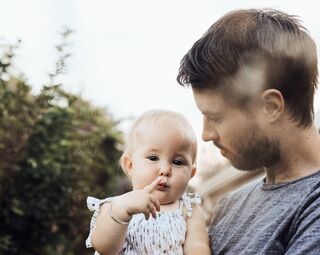 Dads who spend more time with their babies are less likely to become depressed.

The fact that so many parents are experiencing clinical depression in the first year of having a baby is a huge problem. When it comes to fathers, their suffering alone makes this an important issue. But there are also several downstream effects when a father is depressed. Since one of the risk factors for maternal postpartum depression is whether a father is supportive, mothers are more likely to suffer themselves when a father is depressed. And depressed fathers also have an impact on their baby. Kids of depressed dads have more behavioral problems and mental health issues.

Observations in numerous studies note that depressed fathers are less engaged with their children. Many assume that it’s the depression causing the fathers to be distant. But what if it’s the other way around? What if fathers who don’t get to be actively involved with their babies end up getting depressed?

When fathers are involved with their kids, the impact is obvious. Greater paternal involvement during infancy has been tied to lower infant mortality rates, higher IQ for the child at age three, and a more secure father-child attachment. The amount of time dads spend interacting with their babies during the infant period is also tied to lower rates of behavioral problems in their children when they get to kindergarten.

Fathers need time with their baby

A new study published in the open-access journal Frontiers in Psychology looks at exactly this question. This is the first study to find that a father’s involvement with his baby protects him from later depression.

“We found that fathers who were more involved with their infants shortly after their birth were less likely to be depressed a year later,” said study author Dr. Olajide N. Bamishigbin Jr., an Assistant Professor of Psychology at California State University, Long Beach, in a press release.

“In our paper, we suggest a few reasons that greater father involvement in parenting would lead to less depression in fathers. For example, fathers who are more involved during infancy may feel more competent as parents and be more satisfied in their role as parents over time, and this could contribute to lower depressive symptoms.”

The researchers conducted home interviews with 881 fathers one month after the birth of their baby. The fathers were described as low-income ethnically and racially diverse, from five different sites in the U.S. This is an important group to study because finding support and childcare can be difficult when money is tight.

They looked at three key factors: how much time the father spent with his baby, his sense of self-efficacy as a parent, and the material support for the infant. The researchers also administered the Edinburgh Postpartum Depression Scale to the fathers when the babies were 1, 6, and 12 months old. All three of the factors were important, but the time a father spent with his baby stood out to the researchers.

“In our study, greater early involvement was related to less depression later on. This is very important because it suggests that if fathers are involved with their infants early and often, their mental health, and the health of the entire family unit, may fare better,” said Bamishigbin.

“This is why we suggest that paid paternal leave policies which can allow fathers the opportunity to be more involved with their kids and gain confidence as a parent early on in their lives, without having to worry about their economic security,” he went on. He hopes that as fathers are able to be more involved with their kids, future generations will be more likely to thrive. For Bamishigbin, this is about the well-being of the entire family.