Since Putin began his invasion of Ukraine in February, several members of the royal family have shown their support for Ukraine and its people. And today, the Princess of Wales met with families who have fled the conflict as Kensington Palace shared that the Royal Foundation will provide advice and support for First Lady Olena Zelenska’s mental health strategy.

Kate met with displaced Ukrainian families who have arrived in the UK today at a center in Reading, southeast England this morning. She joined children for an art session at the Reading Ukrainian Community Centre, which provides advice, education and support. Chatting with parents and children, the Princess asked them about their circumstances and experiences. 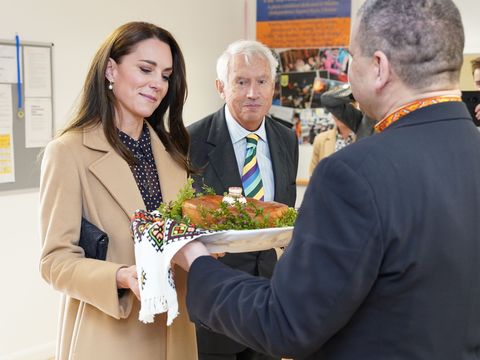 The Princess of Wales receives bread and salt on her arrival as she visits the Reading Ukrainian Community Centre.

“Her Royal Highness’ visit follows a virtual roundtable meeting, convened by The Royal Foundation of The Prince and Princess of Wales, which took place last week to provide advice and share best practice to help support the First Lady of Ukraine’s mental health strategy, which was announced in August to address the impact the ongoing conflict is having upon the mental wellbeing of Ukrainians,” Kensington Palace said in a statement. “The Royal Foundation will continue to provide advice and support for The First Lady’s work on mental health over the coming months.” Areas discussed at the roundtable, which brought together experts from across the UK as well as representatives from Ukraine, included reducing stigma around mental health challenges and how the strategy can learn from how specific groups such as children and veterans have previously been helped. Finding ways to support people with their mental health—particularly young people—has been a focus of William and Kate’s royal work for the past decade.

The visit is one of many that the Prince and Princess of Wales and other royals have made to support the people of Ukraine, meeting with refugees and those helping them across the UK and elsewhere. They have also at times signaled their support in other ways, with donations to the Disasters Emergency Committee’s Ukraine Humanitarian Appeal, and through messages of support on social media. In March, Prince Charles described Putin’s invasion of the country as “brutal aggression.” Around the same time, Queen Elizabeth was photographed at Windsor Castle in front of a huge display of flowers in the blue and yellow of Ukraine’s national flag.

Town & Country Contributing Editor Victoria Murphy has reported on the British Royal Family since 2010. She has interviewed Prince Harry and has travelled the world covering several royal tours. She was the Daily Mirror‘s Royal Correspondent and is a frequent contributor to Good Morning America.