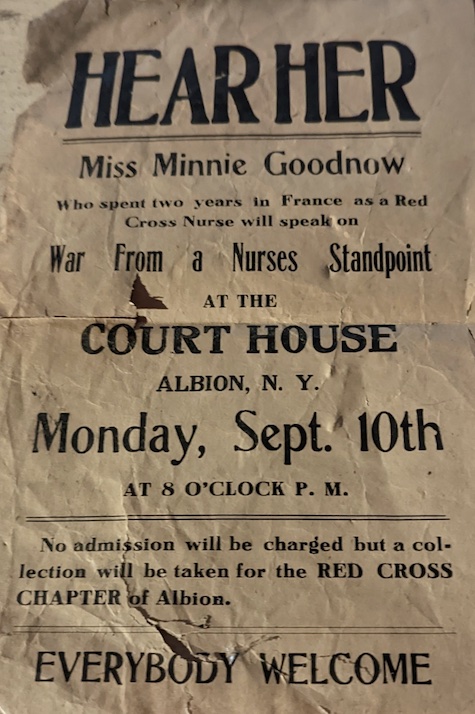 Chad Fabry recently found this poster in the attic of the Swan Library building.

ALBION – Miss Minnie Goodnow was no stranger to the audience assembled at the Court House in Albion on Monday, September 10, 1917, to hear her speak about her experiences as a nurse in France.

Minnie was born in Albion on July 10, 1871, the daughter of Franklin and Elizabeth (Arnold) Goodnow. The 1887 Directory lists Frank as a builder, the family home was at 28 Clinton St.

(According to the Goodenow Family Association, five Goodenows immigrated from the south of England in 1638 on the ship Confidence and settled in Sudbury, Massachusetts. The name is spelled various ways including Goodenough, Goodnough, Goodno, and Goodnow among others.)

Minnie attended Albion schools. The family moved to Denver, Colorado, where she trained as a nurse. At the age of 44, she was a member of the second contingent of the Harvard Surgical Unit who volunteered to provide medical assistance during World War I. Under the leadership of Dr. David Cheever, the group of 30 physicians and 36 nurses sailed on the Noordam in November 1915 and arrived at the General Hospital winter quarters at Wimeraux in France on Dec. 2. The first intake of wounded soldiers from the front lines arrived on Dec. 15. The unit treated 1,400 patients over the next three months.

In a letter to friends in Decatur, Ill., Minnie wrote:

“It is utterly impossible to tell you or make you realize what it is like over here. War is the business of the country, and it is organized on a remarkably permanent basis. Everything is affected by it. France is drained of her able-bodied men, and the work of the country is being done by boys, old men, and women.”

The Orleans Republican of March 22, 1916, published a request from Minnie for writing paper and envelopes for the soldiers in hospital who wanted to write to their families. She also requested drawstring bags, about 9” by 12”, made of plain material, in which soldiers could store personal items.

As would naturally be expected in the winter season, probably one-half the cases were sick rather than wounded…. The wounds were almost entirely due to high explosive shell fire, machine-gun and rifle fire, and bombs, the proportion of injuries by shrapnel being comparatively low, owing to the fact that there is a great preponderance in the use of high explosive shells over shrapnel.

During her distinguished career, Minnie held executive posts at several hospitals: Directress of Nurses, Milwaukee County Hospital, Superintendent of the Women’s Hospital, Denver, of the Bronson Hospital, Kalamazoo, and of the Children’s Hospital in Washington, D.C., the Newport Hospital (R.I.) and the Pratt Diagnostic Hospital in Boston.

She was considered a pioneer in the fields of nursing education and nursing history and was the author of several textbooks which were published by W.B. Saunders of Philadelphia:

• War Nursing: a Textbook for the Auxiliary Nurse, 1918

Minnie maintained her Albion connections and visited the area frequently. The Holley-Standard of May 24, 1894, listed her as among those who had attended the laying of the cornerstone of the Pullman Church. When visiting, she stayed with her sister, Mrs. Adeline Porter, or with her friend Lillian Achilles, Director of the Swan Library.

Minnie travelled extensively. Returning from a two-year round-the-world trip in 1937, she lectured frequently on her observations. Locally, she addressed the Union Evening of the Protestant Churches in Albion in November 1937 on the topic of “Zionism in Palestine and Christianity in Asia”. Having acquired first-hand information on international affairs during her travels through forty countries, she outlined the facts of the Jewish-Arab-English situation in Palestine and the underlying issues of the Sino-Japanese conflicts “in an interesting and charming manner” (Orleans Republican, 11/10/1937)

She died in Boston at the age of 80 and is buried at Blossom Cemetery in Hamlin, along with her family.