In 2005, Nursing Times looked back at each decade of nursing in a special edition to celebrate its centenary. To mark the birth of the NHS this month, we are republishing the part of that special issue that focused on nursing in the 1940s.

The nation was at a low ebb as the 1940s began. German bombing had devastated towns and cities across the country, destroying military, industrial and civilian targets, while the army had been humiliatingly driven out of France at Dunkirk.

Germany aimed not only to inflict physical damage through its bombing campaign but also to destroy the morale of the population ahead of a planned invasion. In one 24-hour period London had been hit with 5,300 tons of high explosives, mainly in the East End.

In the densely packed working class areas of British cities few people had a garden in which to erect one of the sturdy Anderson shelters developed to protect them. Instead, the government had built communal shelters in basements and at street level.

The surface shelters were poorly built and many crumbled when the bombs began to fall, increasing the casualty figures. Despite being forbidden to do so by the government, Londoners began to sleep in Tube stations, while elsewhere they sheltered in church crypts and any other space that was deep underground.

City hospitals cared for the casualties under difficult conditions. Patients were often treated while staff cleared up the hospital’s own bomb damage around them. 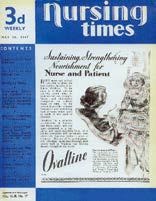 How Nursing Times looked in the 1940s

The situation was not all negative, however. Although Japan had entered the war against the Allies, Britain had the support of other countries including the Soviet Union and the US, which had been shocked into participating by Japan’s attack on Pearl Harbour in 1941.

There was now a realistic prospect of victory, although it was to take a further five years and involve fighting across the globe to achieve.

Bombings at home and fighting on the numerous overseas fronts increased the demand for nurses. However, with most of the men conscripted into the armed forces, women with the level of education required for registered nurses had an unprecedented range of career options. Many of these offered better pay and working conditions – and personal freedom – than nursing.

The profession realised that although more nurses were desperately needed, the real requirement was for people who could do the less technical aspects of the job but who still had core nursing skills. It was concerned to protect the public from nurses with little or no experience, who were being tempted out of the training schools by commercial agencies with the offer of higher starting salaries than they received as trainees.

“Nursing was moving towards true career status, rather than being a vocation”

An Interdepartmental Committee suggested that the only way to stop these abuses was by regulating the training and enrolment of assistant nurses and making it illegal for anyone to nurse ‘habitually and for gain’ without being a registered nurse or an enrolled assistant nurse. Like dentistry, nursing would become a closed profession – even though the medical profession had not yet taken the step.

In 1943 assistant nurses gained official recognition. Later to become known as enrolled nurses, they would train for two years instead of three, and be enlisted on a nursing roll. Their primary purpose was to care for those with chronic conditions, leaving the registered nurses free to provide acute and emergency care.

The same year there were also moves to make nursing a more attractive career by removing the discrepancies in pay and conditions from one hospital to another. The Nurses Salary Committee recommended national salary scales for all nurses and students.

The committee also called for the introduction of a 96-hour fortnight and living-out allowances for nurses other than students and the matron and assistant matron. Nursing was moving towards true career status, rather than being a vocation that expected women to give up their personal lives almost entirely.

Despite the shortage of nurses the profession was determined to continue improving the quality of nursing care by further regulating training. There was a huge number of nursing schools, some attached to hospitals that were simply too small to provide adequate training.

The Horder Committee recommended the number of nursing schools be reduced, and that small hospitals without the facilities to provide complete training alone should join together in group schemes. The committee also recommended that schools should be inspected periodically to check on standards of training.

The country’s main focus may have been on the war but reform was still on the agenda for when the fighting stopped. In 1942 The Beveridge Report laid the foundations for the post-war welfare state.

His ambitious plan was based on three assumptions – the provision of family allowances, comprehensive health and rehabilitation services and full employment, ‘achieved through cooperation between the state and the individual’ and paid for through a system of National Insurance.

In 1944 the Ministry of Health fleshed out Beveridge’s plans for health care in its white paper A National Health Service. This recommended the creation of local and regional authorities to take responsibility for hospital and specialist health care, either providing the services themselves or making contracts with voluntary hospitals.

General practitioners would be paid depending on the size of their lists, and all health services would be free at the point of delivery. It would be funded by National Insurance and central and local contributions.

Nurses gave the proposals a cautious welcome. While the profession supported the principles of a national health service there was concern about whether families on low incomes would be able to afford the National Insurance contributions that would fund it. In order to be worthwhile, the welfare state would have to improve the lives of the 50 per cent of the population living in poverty before the war.

By this time the war was at last going the Allies’ way. The Soviets were defeating German forces in much of Eastern Europe, Italy had surrendered, and Britain and the US were ready to take back northern Europe. The D-Day landings in June 1944 meant the Germans were fighting on two European fronts and were gradually pushed back.

“There was a real determination to push ahead with welfare reform”

In May the following year Germany surrendered. After atomic bombs were dropped on Nagasaki and Hiroshima, Japan also gave up the fight.

Like much of the rest of the world, Britain had to rebuild after the war. However, unlike the years after the First World War, there was a real determination to push ahead with welfare reform.

In July 1945 Clement Atlee’s Labour government was elected in a landslide victory, and despite the economic devastation, began to act on Beveridge’s recommendations. The National Health Act of 1946 established a comprehensive service to ‘secure improvement in the physical and mental health of the people of England and Wales and the prevention, diagnosis and treatment of illness’.

Virtually all hospitals came under the control of the Ministry of Health, while GPs, dentists and opticians were also brought into the service. County and borough health authorities were created to take charge of maternity and child welfare services, home nursing, health visiting, immunisation, prevention and ambulance services. The new service came into operation in July 1948.

The government also nationalised many industries including coal, electricity and the railways. However, life was austere for the population, with food and petrol rationing still in force.

In 1947 nurse training was again reviewed by the Inter-Departmental Committee on the Recruitment and Training of Nurses.

This aimed to address the restrictions and the pressure of work on trainee nurses, recommending they be given full student status, and that their training should be dictated by their learning requirements rather than the staffing needs of the service. It also recommended assistant nurses be phased out and their duties reassigned to registered nurses or nursing orderlies.

The committee’s recommendations were virtually ignored in the Nurses Act of 1949. While training for registered nurses remained at three years, it was reduced to one year for assistant nurses, who were renamed enrolled nurses.

War and social change were not the only significant events in health care in the 1940s. Advancing knowledge of the processes of cross-infection led to recommendations that nurses no longer undertake domestic duties, to minimise the risk of them becoming contaminated through ward dust and passing infections on to patients with open wounds. This was warmly welcomed by nurses, who had long fought to be relieved of these duties to free them up to develop their clinical skills.

Meanwhile, the potential of penicillin in treating infections had been recognised and the drug became widely available during the war, saving many wounded servicemen who would otherwise have died.

Further research also led to the discovery of streptomycin, which was effective against tuberculosis. The antibiotic age had begun.

1943 – Statutory recognition is given to enrolled nurses, who were required to do two years’ training instead of three

1943 – The antibiotic streptomycin is discovered to be effective against tuberculosis

1945 – The war ends in Europe, then three months later in Japan after atomic bombs are dropped on Hiroshima and Nagasaki

What to know about this complex mental health diagnosis