As Covid-19 cases surge across large parts of Europe and the U.S., officials are reluctant to force another round of nationwide lockdowns of the sort imposed in March.

But this time—unlike in the spring—public-health experts broadly and increasingly agree, with some worried that the general public won’t cooperate with another monthslong, generalized lockdown against a disease whose transmission is now much better understood.

The World Health Organization has long favored interventions that come with less economic and social disruption than lockdowns, recommending that governments pursue a strategy called “test, trace, isolate,” of sequestering people exposed to the virus. Western governments have found themselves with too few tests and not enough contact-tracing staff to follow that plan of action.

Still, in recent days, WHO leaders have become more vocal in their encouragements that governments could do more to improve public-safety measures that would reduce the need for a second round of nationwide lockdowns.

“What we want to try and avoid, and sometimes it’s unavoidable, we accept that, but what we want to try to avoid are these massive lockdowns that are so punishing to communities, to societies and everything else,” Mike Ryan, executive director of the WHO health emergencies program, told reporters on Friday.

The United Nations agency isn’t alone. Thousands of public-health experts in the past two weeks have signed an open letter, according to its authors, asking governments to shield the most vulnerable parts of their population and allow youth and healthy people to attain herd immunity. The authors of the letter, called Great Barrington Declaration, say they have pressed their case in discussions with U.S. Secretary of Health and Human Services Alex Azar and Florida Gov. Ron DeSantis.

Their views aren’t universally shared among epidemiologists, some of whom doubt whether immunity to Covid-19 lasts longer than a few months. The virus has proven often debilitating, and sometimes fatal, among the young and fit. The U.K.’s brief attempt to pursue a herd immunity strategy became unfeasible, as hospitals overloaded and even relatively healthy people fell seriously ill—among them, Prime Minister Boris Johnson.

Still, where public-health experts increasingly agree—including critics of the Great Barrington Declaration—is that the broad, monthslong lockdowns imposed in March may be too unpopular to sustain. Experts who backed lockdowns in the spring now worry another round of the same type could backfire if the public ceases to comply.

Even proponents of more lockdowns are generally pushing for briefer, more targeted closures, dubbed circuit-breakers, in which governments would shut specific businesses for two or three weeks, such as bars, restaurants and possibly universities. Other institutions that appear to be lower risk—including day cares, elementary schools and outdoor facilities—could remain open.

“The opinion of public health experts is changing very rapidly,” said Jayanta Bhattacharya, a professor of medicine at Stanford University, who is one of the co-authors of the Great Barrington Declaration. “In March, I felt alone. [Now] I think there are a very large number of public health experts, epidemiologists, and doctors who oppose further lockdowns.” 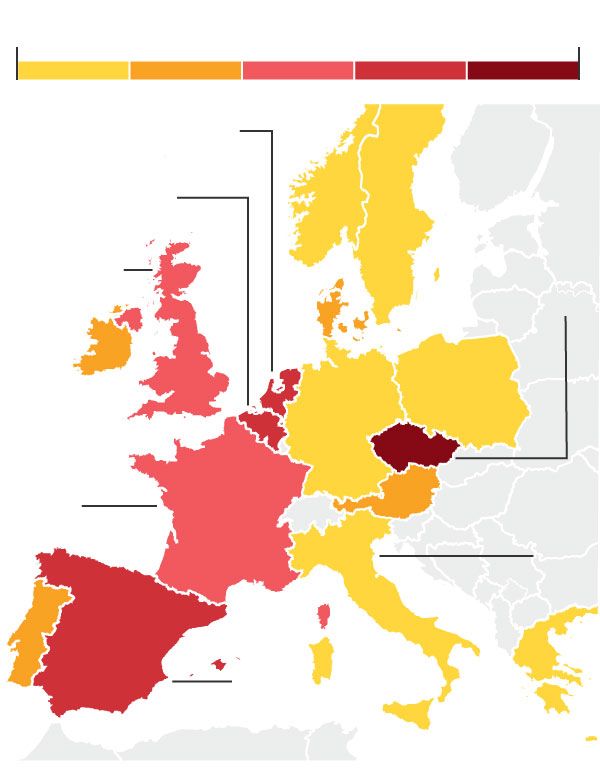 The shifting attitudes toward lockdowns show how authorities are becoming more confident in their understanding of how Covid-19 spreads, even as the virus racks up unprecedented case counts.

The world reached a record 350,000 daily Covid-19 infections last week, the WHO said Friday. A third of those were in Europe, where hospitals in some of the worst-hit countries—including the U.K., France and the Netherlands—have seen their average number of daily cases surge.

In Britain, Mr. Johnson said on Monday that the number of coronavirus cases had quadrupled in the past three weeks and the number of hospitalized people with Covid-19 was the same as when the country locked down on March 23. He announced a three-tier system of restrictions, but he said a total lockdown “would not be the right course.” The northern city of Liverpool was placed in the “very high” category following a rise in cases from Wednesday, and other northern regions are expected to follow. That will result in the closure of bars, gyms, bars and casinos. Three temporary hospitals have been put on standby in the north of the country in case infections continue to rise there.

In nearly all European countries, there are still far too few tests being conducted to break the chain of transmission by isolating only exposed people. In the U.K. only a fifth of people asked to self-isolate have complied, according to a research paper published in August for the government’s Scientific Advisory Group for Emergencies.

“In much of Europe and the U.S., these strategies have failed,” said Deepti Gurdasani, a clinical epidemiologist and senior lecturer at the Queen Mary University of London. “There is no shortage of advice and science. It’s just not being followed.”

With cases spiking, governments across the European Union have imposed restrictions on international travel on their neighbors, hoping to stave off harsher impositions. Most countries restrict large gatherings, and in some places—like England, the Czech Republic and major German cities—bars have been told to close early.

“If in the next couple of weeks, we’ve not clearly managed to bend the curve, you will see a recommendation for some kind of lockdown,” said James Naismith, a director the Rosalind Franklin Institute, U.K.-government backed medical research center.

But those could be more localized, aimed at particular hot spots, rather than nationwide, he and other public-health experts said. Western governments could block travel into and out of hard-hit zones, to limit the spread of the virus and the accompanying disruptions to other areas. Schools, he said, should remain open.

“Public health is about what’s also doable,” Prof. Naismith said. “People are wary that public support for lockdowns could fragment.”

In March, medical scientists lacked a consensus on how the virus spread, and backed sweeping lockdowns as a tool to buy time. At the time, there was little clarity on which age groups were most transmissive, or which interventions worked. From February into June, the WHO’s group of outside experts, and their counterparts at the U.S. Centers for Disease Control and Prevention, debated whether masks help, where and how the virus most easily spreads and which age groups are most contagious.

These days there is a broad consensus on those questions.

Cramped, crowded and poorly ventilated rooms where people are talking, shouting or singing are high-risk, such as bars, nightclubs or small restaurants. Elderly care homes require far more protection and testing of staff and visitors than they were afforded in the early months of the pandemic. Widespread mask wearing significantly cuts transmission. Spacious, outdoor settings pose far less risk.

Children under 10 years old appear to experience milder cases, and don’t spread the disease as easily. While the WHO hasn’t issued a formal recommendation for schools to be opened or closed, some officials at the agency have expressed their personal viewpoint that the benefits of an education and a healthy childhood outweigh the risks, which can be managed.

“We know where transmission takes place, we know riskier settings, we know how to control this and keep [the] economy and society moving,” said Devi Sridhar, professor of global public health at the University of Edinburgh. “I’m not for lockdown either. But let’s focus on what works.”

—Max Colchester contributed to this article.